Who Is My Neighbor?

Who Is My Neighbor?

Several months ago, my friend Kori introduced me to Ahmed and Mofeeda and three of their ten children. The family arrived in Nashville early in the summer, both thankful and apprehensive about leaving their war-torn Syrian homeland behind. Ahmed is a famous musician in Syria and the surrounding area; he’s literally played for kings. He also happens to be blind. (Cool!)

The first time I visited their two-bedroom, sparsely-furnished apartment, I took a folding cane for Ahmed. When Kori had met them weeks earlier, she’d asked, through a translator, if Ahmed might like to have one, so we went to great lengths to make sure we got the right size, and I brought it back from a trip to Minnesota. But when I gave him the folding stick, he wasn’t sure what to do with it. Through Google Translate and body language, we finally understood that a cane wasn’t something Ahmed wanted or felt he needed. (So much for our hard work.) Nothing daunted, we moved past the cane and went on to play music. 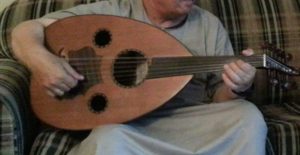 Kori’s family brought over a keyboard and guitar, and Ahmed’s family already owned an oud (think exotic guitar) and a drum. For at least an hour, we played American songs and Syrian songs. We didn’t understand each others’ lyrics, but the language of music intertwined our hearts. Their melodies and the sounds of the oud felt mysterious to my Western ears, but I was completely captivated. As I listened, I couldn’t help imagining what their lives in their former homeland had been like. When it was our turn, I played keyboard as Naomi, Kori’s daughter, sang worship songs. Our Syrian friends clapped enthusiastically after each song, and I wondered if they had the same curiosity and fascination I did.

Jon Huckins, co-founder of the Global Immersion Project, once said, “Over the years, I have discovered that the only way to love and be loved by my neighbors (locally and globally) is to be in relationship.” I’m learning this too. It is impossible not to misinterpret or misunderstand those we don’t know, but taking a step toward people whose culture is different from ours is taking a step toward understanding.

The Problem with Them vs. Us

Many of us Westerners assume most Muslims are terrorists, and I’ve read that many devout Muslims consider all Christians immoral and irreligious. (Ironic, isn’t it?) I know a bit about this assumption problem firsthand. Often when I meet someone for the first (or the fifth) time, they tell me about the other blind person they knew, and assume that person and I are one and the same. It’s always a huge win when they come to see me as a unique individual. As relationships form, stereotypes are forced out. For both parties. As “we” get to know “them,” they become living, breathing human beings with needs, desires, and compelling life stories. Just like us.

So… Who Is My Neighbor?

When the “expert in the law” questioned Jesus about who he should love and serve, Jesus essentially said, “The person your culture looks down on; the person who seems most uncool and undesirable. The person who has an incredible need.” (Lk. 10 25-37) Refugees are here. We can either pretend they don’t exist, or love and care for them, like the Good Samaritan in the parable. If we are Christ-followers, we have no choice but to follow Jesus’ call to action. But how?

My friend, Kori, has gone all in. She meets the needs she sees, whether it be a trip to Walmart or the dentist. I’ve visited our Syrian friends a couple of times, but those visits can take several hours, which I typically don’t have. I’m working on carving out that time in the future, though. I know it’s important.

If you’re not ready to go all in, or you don’t know where to begin, ask your church about local programs to help refugees, and get involved. You can also find ways to help at World Relief. Finally, educate yourself on the current situation, the need, and what scripture says about loving your neighbor.