I met Octavia when we were little kids. Our parents had joined forces to start a support group for parents with visually impaired children, and Octavia and I were always the oldest two kids at the meetings. So we joined forces too.

Octavia was a year older than me, and way cooler. Always the life of the party, and always ready with the perfect come back, I was glad she was nearly always on my side. She also had enough vision at that time to report details I couldn’t see – who had the cute dress, which one was the cute guy, whose hair looked a mess, and which grown-ups snuck the most cookies during the parent meetings.

Octavia and I attended public school and the school for the blind together. In fifth grade, we discovered our mutual love of singing and organized a class singing group – coercing our friends to join and kicking them out when they misbehaved. We’d sing gospel songs and every New Edition and Kool & The Gang song we knew from the radio. Sometimes we’d avoid classwork by singing for our teachers. In sixth grade, when we realized we were the only two unfireable members of our group, we officially became best friends. And the rest is history. 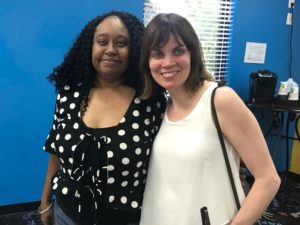 I don’t remember the exact day, but sometime during those middle school years, one of our teachers predicted the demise of our friendship, and we both remember what she said.

“Y’all are close now, but when you get older, you won’t be. You’re not the same color. And one day, that will matter. Trust me, you’ll give up on each other.”

We promised each other she was absolutely wrong and that would never happen.

Over the remaining years of school, we learned together what friendship meant. We saw each other through girl drama, break ups with boys, and more naysaying than you’d expect about our friendship. Maybe all of that made our relationship stronger. We eventually went our separate ways to college and beyond, but we continued to walk with each other through the good and the dark days.

Even now, though we’re miles apart and don’t get to talk nearly as much as we’d like, we’re still connected. Rae, Octavia’s oldest daughter, bears my name in her middle name, Ginelle. Obruche, Octavia’s middle daughter is the life of the party just like her mother. Iyanu, Octavia’s youngest, is practically a granddaughter to my mom; they hang out every week. The above photo was taken at my niece Josephine’s party, where she and Iyanu became besties.

These days, Octavia and I are living such different lives. She’s a mom managing three, and I’m doing my best to manage myself. She’s not a fan of singing much anymore, and I can’t stop. I wish I had soul, and she actually does. She’s black and I’m white. But we value our differences as much as we value the ways we’re alike. In spite of what our teacher said, I know we’ll always stand together because we’ve learned how to walk with each other – in every season.

Growing up in a predominantly African-American world, I learned early on to value diversity. And now, whether it’s listening to stories of refugees or learning from my Uber drivers, I want to understand people. To truly see them. I am naturally inclined to be interested in others, but there’s more to it than that. I’ve learned that I’m far more likely to be frustrated with someone whose viewpoint is different from mine if I don’t understand something of their life experiences – where they’ve come from, what they’ve been through, even what they’re running from. If I have a sense of who they are, I can care about them in spite of our differences.

So why am I telling you all this?

Like many of you, I am deeply concerned about our inability to see each other these days. It seems we have become slaves to our polarizing politics and our presumed right to speak our truth regardless of who we hurt. So we’re not listening. We’re shouting. And as a result, we’re all little islands, standing alone. As tragedies continue to unfold around us, I continue to be more disturbed by this profound problem. After the Manchester bombing and Vegas shootings in 2017, a chorus came to me, as they often do: “If you stand, if you stand with me / we can take on the world / We can face anything.”

We desperately need each other’s help to love, to forgive, and even to think. As Alan Jacobs says in his book How to Think (which I highly recommend), “Thinking is necessarily, thoroughly, and wonderfully social.”

I can’t help but wonder if part of the reason there are so many horrible tragedies is because people are left alone, thinking only for themselves, and then making terrible choices. And for those of us who must bear those tragedies, we are without hope if we face them alone. I am convinced that there’s a better way. As I poured out all these thoughts to my friends Tyrus and Lauren, they thought with me, and we created the rest of the song together.

What Does it Mean to Walk Together?

Lest you fear I’m saying, “If we just talk more to each other, we’ll get warm fuzzies and everything will be ok,” let me explain what I mean practically.

The other night, I arrived at my apartment at 10 PM exhausted and missing one of my bags after a weekend of travel. The one suitcase in my possession weighed 60 pounds (thank you CD boxes). Carrying it up several flights of stairs was no picnic. In addition to the cardio, I felt a wave of sadness as I managed this task alone. Traveling for a living is also no picnic. 🙂 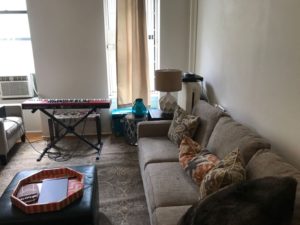 The next night about the same time, my missing bag arrived. This time, however, two other tenants happened to be outside. They didn’t know each other or me, but both insisted I not try and carry the bag alone. Bless them. Halfway up the flights of stairs we all introduced ourselves and which apartments we lived in. I know these ladies had places to be, but they literally walked with me, which was not only a tremendous physical help but also so encouraging. I didn’t feel alone in my plight.

Maybe your burden isn’t a suitcase full of clothing and CDs, but I’m sure you’ve got one. And so does the person standing next to you who looks or thinks nothing like you. But that doesn’t mean you can’t walk with each other. All you have to do is introduce yourself and offer to help. Who knows? Maybe you’ll start a singing group and become best friends.

What Does Jesus Have to Do with It?

Many of you reading this know that I’m a follower of Jesus. I think He offers the perfect example of how to live life together. Even though most of the folks He interacted with did not understand where He was coming from, He didn’t let that stop Him from walking with them, inviting them out of hiding, and truly seeing them and meeting them where they were. His ultimate act of standing with them – and with us – came when He chose not to stand for Himself, giving His life so we could walk with Him every day.

Let’s learn how to carry each other so we can face whatever comes, together.