Last month I made back-to-back trips to Tulsa and Minneapolis, and got to have back-to-back adventures with the new trendy kid toy – slime. My seven-year-old friends Tatum (in OK) and Maisie (in MN, there she is on the pic) taught me everything I needed to know about the stuff. Have you ever felt it? Ew. The texture is an odd mix of creepy and delightful. There’s the kind that’s more like playdough, with a thicker consistency, and then a kind that’s almost creamy and jelly-like. That kind offends my fingers a little.

Because I like to think about… well… everything, I contemplated what fun things I could learn while doing my time with slime. Here are four things I walked away with that I thought you might like too.

Anything can be an adventure:
In a very short period of time, my buds and I played every single game they could invent involving slime. Hide the slime. Hide the jewels in the slime. Name the slime. But the favorite game of both girls was making “fun” (farting) sounds with the slime. And if we’d had hours, we could have filled all of them with more slime fun. At the end of the day, the girls inspired me to think of all the ways I can make adventure out of my mundane. 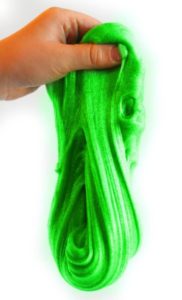 Sometimes you’ve got to dig into the gross to get to the good:
Tatum was the first to introduce me to slime. She had multiple cans containing all different colors and textures. When she handed me the first batch, she said, “It’s gross for a second, but then it’s fun!” She was right, of course. It reminded me of when I decided I’d learn to like Sushi. The first few times weren’t enjoyable. Now, with a little help from my other friends, wasabi and ginger, I quite like it. (At least the veggie kind. Baby steps.) It’s the same thing when I sit down to write. The first few minutes are never fun. But then, it is. So next time you have to do something gross, visualize slime and go for it with a smile.

With a little convincing, we can learn to like anything:
This is both a good thing and a bad thing. I was fascinated that neither of my girlie-girl pals were playing princess, but thankful they weren’t participating in another trend: playing scary video games. We grown-ups have our own trendy pastimes. Do you chuckle at them as much as I do? Our devotion to kale and Brussels sprouts are things I can get on board with. But there are many other trends better left unfollowed. (You can make your own list later. This is a light-hearted blog.)

Play keeps the stress away:
I have to admit, when I turned my attention to my young friends and their slime, I stopped thinking about work. I played with the gooey stuff and left stress behind. Whether we’re seven or seventy-seven, play is a part of life we don’t want to skip. And if slime is your “play” of choice, I guarantee you there’s some to be had nearby.
Maybe you’ve never considered slime as a useful tool for living. Hopefully I’ve changed that. Go get some. And enjoy!

Have inanimate objects ever inspired new thoughts for you? If so, I’d love to hear about it!