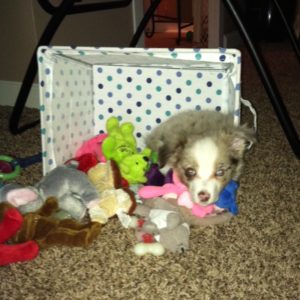 Lewie, my mini Australian Shepherd, came to live with me during a season when I wasn’t on the road much. And when I did travel, he’d often come, too – I played the music, but he was the hit. When I first got Lewie, I read an article that said puppies need time each day to learn how to play. So, like any over-the-top puppy owner, I bought too many toys and we played with a new one every day. Lewie was scared of any new toy I brought out — barking at it, then hiding from it. The next day he’d pounce on the same toy as if it were his favorite. I thought it was a funny quirk unique to Lewie, until this past weekend when I discovered the same quirk in myself.

This weekend I hung out with my Dad and crew at his lake house. They have a pontoon boat, raft, skis… the whole nine. I have been swimming since I was two and I love to go visit the ocean, but I haven’t spent much time on lakes. Always too busy working (or thinking about working) to take some time to chill on a pontoon boat without a plan. I’m trying to “live” more now, but like Lewie, I approach new fun with a bit of fear.

The first evening when we went out on the boat, every little bump made me nervous. Would this thing tip over? The morning of the second day, my brother JD and I hopped on the raft, and I held on for dear life as the boat pulled us. I was definitely feeling cautious. By cautious, I mean slightly terrified. Was I going to flip over and get caught under the boat? Drown before I finish my next record?

As we went, I realized I was probably going to live and–surprise–I was having fun! On day three, I spent as much time as possible lounging on the raft while the boat pulled me over endless bumpy waves. Then I decided to try out the Jet Ski and go paddle boarding for the first time. My new favorite! Nothing like working out in the water. Next time I’ll go for water skiing.

Can Fear Be Good?

Though I’d prefer to avoid fear, I’m coming to see it as a necessary part of life. I’m not sure we’d be able to develop character or courage if we weren’t first forced to face fear. I was recently reminded of some wise words on this subject: “Courage is not the absence of fear, but the idea that something else is more important than fear.”

Every time I face even a fear like riding a jet ski into oncoming waves I can’t see, I know it’s good for me. Not necessarily fun, but good because it builds courage. I’ve learned to remind myself–even if it is in the tiniest, shakiest voice–that there is indeed something more important than my fear. Maybe it’s all the fun I get to have in the water when I push past my fear; maybe it’s something much bigger.

I’m always looking for extra courage. People often comment on how courageous I appear to be, but internally, I’m constantly battling anxiety and doubts. There have been many seasons where I’ve dealt with my anxiousness by isolating. Being alone sometimes feels like the easiest way to conquer life because–you think–nothing unknown can touch you. But I’ve learned that by isolating, I’m not just avoiding the unknown; I’m allowing space for courage to fail and fear to grow.

These days, I’m very intentional about pursuing courage by facing my fears. And like the first moments on the raft, the pursuit isn’t fun, but it’s worth it. Each opportunity to face a challenge or fear strengthens my courage. I would prefer that God open up my heart and pour the courage in all at once. But instead, He allows opportunities for me to step up to challenges and trust Him for strength, which ultimately creates courage.

What kind of courage adventure could we have this week? Maybe you too need to go hang out on a lake. Or make friends with a spider. Or start that uncomfortable conversation you know needs to happen. Why don’t we let this be the week we go for it? Remember, even a small step toward the big challenge can grow our courage.

Let me know on Facebook or Twitter what baby steps of courage you’re taking! Good for you!